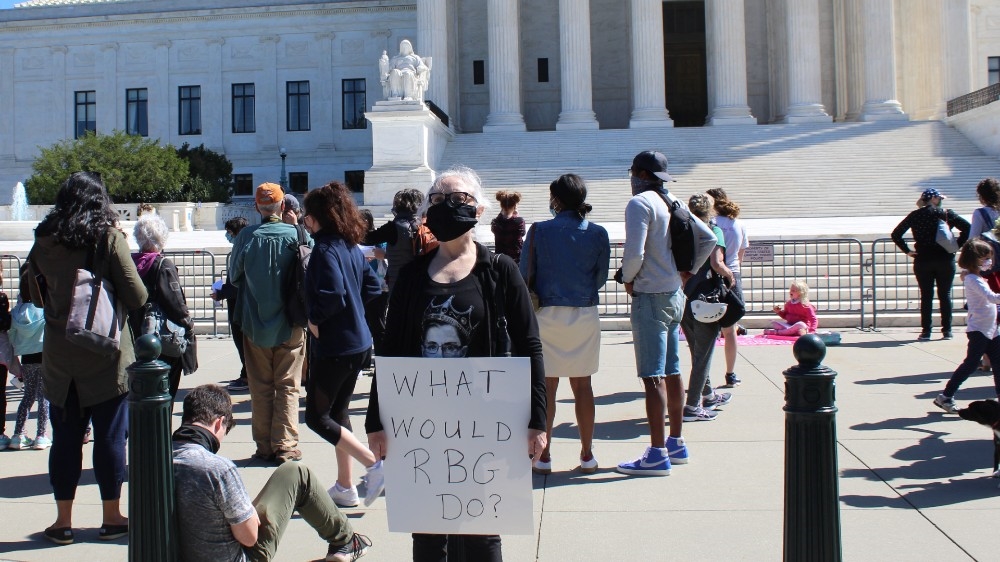 In Midgley’s hands was a sign: “What would RBG do?”

The Baltimore, Maryland, teacher told Al Jazeera that the question highlights how the jurist, who died on Friday night at age 87, acted as the moral compass of the nation.

“I was so upset last night, and I thought, ‘What can I do?’ One thing I can do is help make sure that at least my interpretation of her legacy is shared,” Midgley said.

“She set an example for us. And that example is still here, and her legacy can still inspire us.”

Dozens of people rallied around the US’s top court on Saturday morning to honour Ginsburg and celebrate her decades-long legacy. Thousands had gathered there on Friday night after the news of her death broke.

However, long before Ginsburg’s death, the late justice had become a cultural icon – a rare feat for a member of a court that operates away from the cameras.

Piles of flowers and written tributes covered a sidewalk near the court as the crowd of mostly women hailed Ginsburg’s accomplishments and discussed the future of the court and the nation.

“Dear RBG, thank you for helping me find my voice,” a message written in chalk reads near the court steps.

Ginsburg was the second woman ever to serve as a Supreme Court justice when she was appointed to the court in 1993 by then-President Bill Clinton. She was known for her scathing dissenting legal opinions and advocacy for civil rights.

Before joining the judiciary, she co-founded the Women’s Rights Project at the American Civil Liberties Union (ACLU).

“This is just one way that we can show our respect for her legacy,” Hart told Al Jazeera.

Danielson also stressed that Ginsburg’s seat on the bench should not be filled by US President Donald Trump before the election on November 3.

Supreme Court justices are appointed for a lifetime by the president, but they have to be confirmed by the Senate.

In 2016, Senate Majority Leader Mitch McConnell blocked then-President Obama from filling a vacancy on the court, arguing that presidents should not be able to appoint justices in their last term. But on Friday night, hours after Ginsburg’s death, the Republican legislator said he would move forward to confirm a Trump nominee.

Days before her death, Ginsburg said in a parting message: “My most fervent wish is that I will not be replaced until a new president is installed.”

The debate over Ginsburg’s replacement has already ignited a fierce political battle in Washington, DC, and on Saturday, Trump urged the Republican-controlled Senate to approve his future pick “without delay”. It remains unclear who the president intends to nominate.

Danielson said Trump should abide by the same rules that McConnell set in 2016. “Let’s honour her with that request. To me, it’s just the right thing to do,” she said. 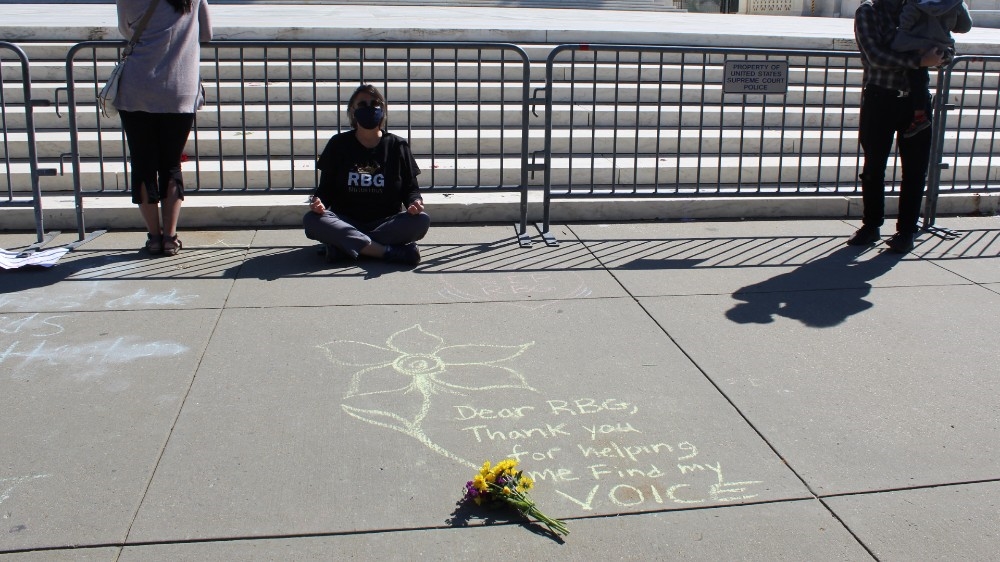 The Supreme Court’s nine justices have the final say on most federal legal matters, including assessing the constitutionality of laws and presidential decrees.

Throughout history, the high court has issued decisions that altered the US governing system and drastically changed Americans’ lives.

Alisha Harris, a recent graduate in public policy from the University of Chicago who was wearing a Black Lives Matter mask outside the court on Saturday, said “it is difficult” not to question Ginsburg’s refusal to retire early in the Obama presidency.

Had she stepped down at that time, Ginsburg would have been replaced by a liberal justice.

Harris acknowledged Ginsburg’s advocacy for civil rights, but she said lifetime appointments to the Supreme Court are an impediment to progress in the US because they prevent the court from reflecting a shifting ideological spectrum.

A person considered left-leaning in the 1980s would be a centrist today, Harris said.

“If the death of one person can drastically change the political landscape in a democracy, it is not truly a democracy; it’s not by the people for the people,” she told Al Jazeera.

Politicians and activists outside the US capital also paid tribute to Ginsburg on Saturday, with New York Governor Andrew Cuomo pledging to erect a statue for the late justice in her birthplace of Brooklyn.

“She was a monumental figure of equality, and we can all agree that she deserves a monument in her honour,” Cuomo said in a statement.

She set an example for us. And that example is still here, and her legacy can still inspire us.

Earlier on Saturday, mourners’ solemn chants of “R-B-G” near the steps of the Supreme Court were interrupted by a young man in a black suit who said he was a Trump supporter.

The man was quickly surrounded by mourners who asked him why he was not wearing a mask to prevent the spread of the novel coronavirus. He responded by saying he does not believe the virus is real.

A woman who was observing the incident from a few feet away could be heard telling a child standing next to her: “And then, there are people like this in America, kid.”