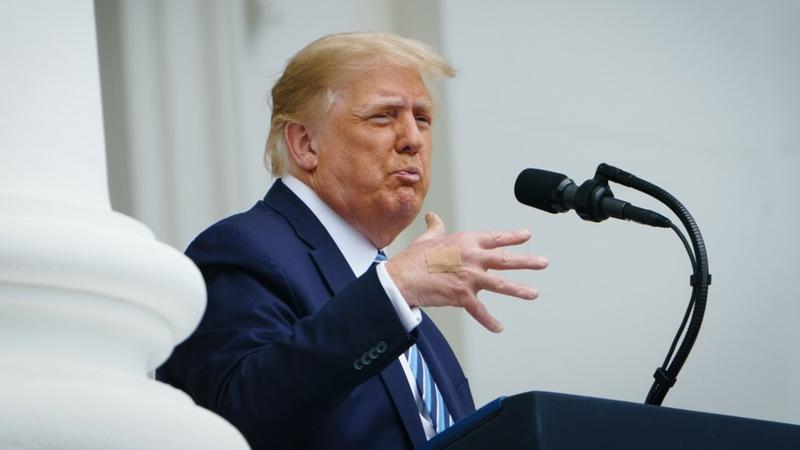 Then US president Donald Trump speaks from the South Portico of the White House in Washington, DC during a rally on Oct 10, 2020. (MANDEL NGAN / AFP)

WASHINGTON- Former US President Donald Trump will seek to return to the political spotlight in an address to a major meeting of conservatives, a source familiar with his plans said on Saturday, as the Republican plots his post-White House moves.

Trump plans to speak to the Conservative Political Action Conference (CPAC) in Orlando, Florida, on Feb. 28, the last day of their meeting, the source told Reuters on condition of anonymity.

“He’ll be talking about the future of the Republican Party and the conservative movement. Also look for the 45th President to take on President (Joe) Biden’s disastrous amnesty and border policies,” the source said.

Trump’s tumultuous four years in the White House ended shortly after he was impeached on a charge of inciting his supporters’ deadly Jan. 6 attack on the US Capitol, where lawmakers were gathering to certify Biden’s victory in the Nov. 3 election.

After spending two months falsely claiming his election loss was the result of widespread fraud, Trump was acquitted in an impeachment trial held in the Senate after he left office. The 57-43 vote fell short of the two-thirds majority needed for a conviction.

Trump plans to speak to the Conservative Political Action Conference (CPAC) in Orlando, Florida, on Feb. 28, the last day of their meeting, the source told Reuters on condition of anonymity

Trump has expressed anger at the 17 Republicans in the House of Representatives and Senate who voted to impeach or convict him, and on Tuesday he aimed his rhetorical fire at Senate Minority Leader Mitch McConnell, the nation’s most senior elected Republican.

The loss of both the White House to Biden and control of the Senate – which Democrats picked up in a pair of upset Georgia election runoff victories last month – has left Republicans on edge as they plot how to win back control of Congress in 2022.

Trump and McConnell parted ways in the weeks after the November election, with Trump irked that the Kentucky Republican had recognized Biden as the winner in mid-December. They have not spoken since, a former White House official said this week.

Trump called McConnell “a dour, sullen, and unsmiling political hack” this week and warned that if Republican senators stayed with him “they will not win again.”

The gap between Trump and McConnell widened when the latter declared after the Senate’s acquittal of the former president that Trump was “practically and morally responsible” for the Capitol siege.

A number of top Republicans who are considered possible candidates for the party’s 2024 presidential nomination are also due to speak at CPAC, including Trump’s secretary of state, Mike Pompeo, and Kristi Noem, the governor of South Dakota.

Another source told Reuters that Trump had rebuffed a request by Haley to meet with him recently after she was critical of him in a Politico article.