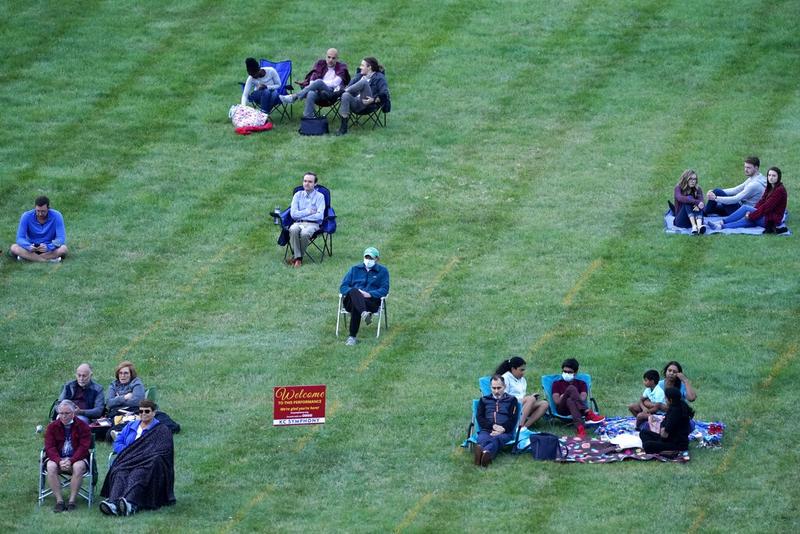 People practice social distancing as they listen to music performed by the Kansas City Symphony on the lawn at the Liberty Memorial in Kansas City, Sept 19, 2020. (CHARLIE RIEDEL / AP)

The US added 41,206 new cases, a 0.6 percent rise that equals the average daily increase in the previous seven days, according to data from Johns Hopkins University and Bloomberg. Another 693 people died of virus-related illness, bringing the toll to 199,258 on Sunday morning.

Nearly 6.8 million in the US have been infected with COVID-19, according to Johns Hopkins University’s tally.

Former FDA Commissioner Scott Gottlieb said he expects the US to experience “at least one more cycle” of the virus in the fall and winter. He cited rising cases in the South and Midwest, despite slowdowns in New York, Miami and Houston.

Gottlieb also said he doesn’t believe there will be a vaccine available for general inoculation until the end of second quarter or the third-quarter in 2021, contradicting President Donald Trump’s earlier comment that all Americans could get vaccinated by April.

Argentina’s Health Ministry said on Sunday that a total of 631,365 COVID-19 cases and 13,053 deaths had so far been reported nationwide.

The ministry said that 8,431 new cases and 254 more deaths were recorded in the past 24 hours.

Currently, 3,261 patients are being hospitalized for the disease in intensive care units while 488,231 people have recovered, it said.

Bolivia expects to see the curve of its novel coronavirus outbreak plateau this month after having registered more than 130,000 cases of infection, Virgilio Prieto, head of epidemiology at the Ministry of Health, said on Sunday.

This month the country had seen a decrease in the number of infections, he said.

As of Saturday, the country has reported 130,470 confirmed cases and 7,586 deaths, accroding to the Health Ministry.

Brazil recorded 16,389 additional confirmed cases of the novel coronavirus in the past 24 hours, and 363 deaths from the disease, the Health Ministry said on Sunday.

The figures do not include any new cases or deaths in the Brazilian states of Tocantins, Amapa and Roraima, as state authorities did not report updated statistics on Sunday, the ministry said.

The newly reported cases and fatalities took the number of confirmed cases and deaths to 4,544,629 and 136,895, respectively, the Health Ministry said.

Colombia reported 169 deaths from COVID-19 in the past 24 hours, raising its death toll to 24,208, the Health Ministry said on Sunday.

Czech Health Minister Adam Vojtech said on Monday he had submitted his resignation following criticism over his handling of the coronaviruspandemic as the central European country sees a surge in cases.

The Czech Republic’s daily count of coronavirus cases dropped to 985 on Sunday, the third day in a row the number has decreased, data from the Health Ministry showed on Monday. Fewer tests are done on weekends than on weekdays.

The overall number of confirmed cases rose to 49,290 in the country of 10.7 million.

Denmark’s government is offering help to restaurants and bars hurt by new COVID-19 restrictions after getting parliament’s backing for the aid package.

The government will provide compensation for rent and other fixed costs to firms that lose revenue after opening hours were cut, the business ministry said in a statement late Sunday. Additionally, the government will set aside 100 million kroner (US$16 million) for other aid to the industry.

Traffic picked up in Ecuador’s capital Quito on Sunday, after local officials lifted pandemic lockdown restrictions on vehicles, allowing them all to circulate.

The move aimed to restart economic activity in the city following months of limiting the number of cars on the road according to odd or even license plate numbers, despite Quito still being the epicenter of Ecuador’s COVID-19 outbreak.

Residents went out in droves, especially to city parks, traditional spots for Sunday family outings. Mask-wearing is still mandatory even inside vehicles, according to a municipal ordinance, with violators facing a US$100 fine.

Ecuador reported 799 new cases and eight deaths in the last 24 hours, the Ministry of Public Health said Sunday. The new figures brought the tally and the death toll to 126,419 and 7,296, respectively.

The number of French deaths from the disease rose by 12 over the preceding 24 hours to 31,585, the health ministry said. The cumulative number of confirmed cases now stands at 453,763.

The rolling seven-day count of COVID-19 hospital admissions rose to 3,894 from 3,853 on Saturday, according to the latest French data, with intensive care admissions stable at 593.

Rising new coronavirus infection numbers in countries like France, Austria or the Netherlands are worrying, German Health Minister Jens Spahn said on Monday, adding that Germany will sooner or later import cases from there.

Countries like Spain have infection dynamics that are likely out of control, Spahn told public broadcaster Deutschlandfunk.

Spahn’s remarks came as data from the Robert Koch Institute (RKI) for infectious diseases showed on Monday the number of confirmed cases in Germany increased by 922 to 272,337, while the reported death toll remained unchanged at 9,386.

In his televised broadcast, Akufo-Addo said the restrictions include the wearing of face masks, the closures of public places such as beaches and cinemas, and land borders. He called on the public to abide by the social distancing rules to avoid a spike in the number of infections.

Ghana has so far recorded 46,004 COVID-19 cases with 297 deaths, according to the Health Ministry.

Ireland recorded 396 new cases on Sunday, the highest since mid May, with about two thirds of the infections in Dublin.

The news came as the Irish capital experienced a first weekend of new curbs – travel in and out of the region was restricted, and indoor dining at bars and restaurants halted. Still, mild weather over the weekend drew many to the outdoor cafes and bars that popped up in city streets.

Italy reported 1,587 new coronavirus cases on Sunday down from 1,638 the previous day. There were 15 additional deaths bringing the total number of people that have died from the virus in Italy since the beginning of the pandemic to 35,707.

The number of coronavirus patients in intensive care at hospitals rose by 7 to 222, according to Health Ministry data. That compares with a peak of more than 4,000 ICU patients in April.

Mexico’s health ministry on Sunday reported 3,542 newly confirmed cases of the novel coronavirus in the country, bringing the total to 697,663, and 235 more deaths, raising the death toll to 73,493.

Deputy Health Minister Hugo Lopez-Gatell has said the real number of cases in the country is significantly higher.

A total of 1,927 fresh infections were registered in the past 24 hours, taking the tally to 101,743, the Ministry of Health said in a statement.

Sweden’s gross domestic product will shrink around 4.6 percent this year, the government said on Monday, outlining a budget bill that will pump around 105 billion crowns (US$12.0 billion) into the economy to kick-start growth following the pandemic.

“Together we are going to work Sweden’s way out of the crisis and build a more sustainable society,” the minority coalition said in a statement.

Measures in the budget, including tax cuts for individuals and companies and more money for the welfare sector, were broadly known.

Sweden has so far reported 88,237 confirmed cases and 5,865 deaths, according to a tally by Johns Hopkins University.

Tunisia on Sunday reported 625 new COVID-19 cases and 17 more deaths, bringing the total infections in the country to 9,736 and death toll to 155, said the Ministry of Health.

Also on Sunday, President Kais Saied ordered the establishment of an analysis laboratory for coronavirus in the central province of Sidi Bouzid amid a surge in the daily infections in the country.

Separately, Habib Guedira, member of a scientific committee for the fight against the coronavirus said that “the epidemiological situation in Tunisia has become a matter of concern because of the rapid spread of the coronavirus.” He warned that the situation “will worsen within a month from now and will become very dangerous if Tunisians do not adhere to health prevention measures and follow the necessary precautions”.

Ugandan President Yoweri Museveni said on Sunday that schools, tertiary colleges and universities will reopen for candidate classes and finalist students, amid the recent spike of COVID-19 cases.

Finalists account for less than 10 percent of the total number of students, and “therefore, each group of finalists will have bigger space for social-distancing — whether they are in day schools or boarding schools,” he said. A plan of further reopening schools for non-finalist learners will be decided by January 2021, he added.

British Health Secretary Matt Hancock said Sunday that Britain is facing a “tipping point” regarding the coronavirus pandemic and more restrictions are possible to cope with the spread of the virus.

“We face a choice. If everybody follows the rules — and we’ll be increasingly stringent on the people who are not following the rules — then we can avoid further national lockdowns,” Hancock told the BBC.

Separately, the mayor of London, Sadiq Khan, warned that London should be placed under new lockdown restrictions as early as Monday to curb the recent surge in cases, local media reported.

The airports have been closed since March when the government came up with regulatory measures to curtail the spread of COVID-19. The cabinet has recently resolved to allow both domestic and international flights to resume on Sept 10 and Oct 1.

After the tour in Harare, Chiwenga said he was impressed by the level of preparedness.

Zimbabwe has so far reported 7,683 confirmed cases and 225 deaths, according to a tally by Johns Hopkins University.