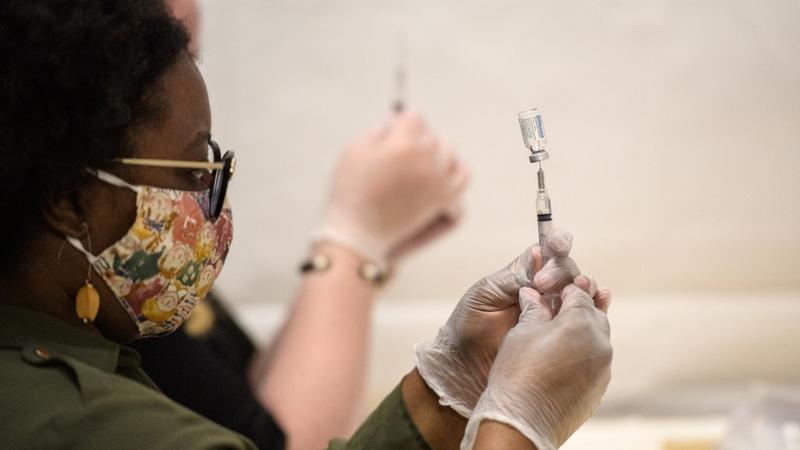 A healthcare worker prepares a syringe with a vial of the J&J COVID-19 vaccine at a temporary vaccination site at Grand Central Terminal train station in New York City on May 12, 2021. (PHOTO / AFP)

PARIS / OTTAWA / WASHINGTON – Johnson and Johnson’s COVID-19 vaccine booster gained a key recommendation from advisers to US regulators that brings the additional shot a step closer to clearance.

The Food and Drug Administration’s vaccine advisory group voted unanimously Friday in favor of recommending the booster for people 18 and older who received their initial immunization at least two months earlier.

FDA’s Vaccine and Related Biological Products Advisory Committee voted to back Moderna Inc’s booster Thursday, and Pfizer Inc’s additional shot was authorized after the panel’s recommendation. While President Joe Biden had foreseen offering boosters to all vaccinated Americans eight months after their first dose, the panel has so far recommended them for people at least 65 years old and younger adults who risk severe illness or viral exposure at work.

The US Centers for Disease Control and Prevention said late on Friday that it will accept mixed-dose coronavirus vaccines from international travelers, a boost to travelers from Canada and other places.

The CDC said last week that it would accept any vaccine authorized for use by US regulators or the World Health Organization. “While CDC has not recommended mixing types of vaccine in a primary series, we recognize that this is increasingly common in other countries so should be accepted for the interpretation of vaccine records,” a CDC spokeswoman said.

The White House said Friday the new vaccine requirements for foreign nationals traveling to the United States will begin Nov 8 for visitors crossing at land borders as well as international air travelers.

The US Food and Drug Administration is delaying a decision on authorizing Moderna Inc’s vaccine for adolescents to review its myocarditis risk, Dow Jones reported, citing people familiar with the matter.

At issue is whether the Moderna shot may lead to a heightened risk of the inflammatory heart condition among younger men, compared with those who received the vaccine by Pfizer Inc and BioNTech SE, according to the report.

Ireland’s Deputy Chief Medical Officer Ronan Glynn urged people to work from home, as COVID-19 cases in the country surge, according to a video on Twitter.

The number of cases has jumped in the past week, with hospitalizations now at their highest since March.

Workplaces reopened on a phased basis last month, with offices set to open fully on Oct 22. Still, Glynn’s comments don’t signal an official change of policy, a government spokesman said. The government will decide whether to drop most remaining restrictions next week.

Around 43,000 people in the UK may have wrongly been told their coronavirus test was negative due to errors at a laboratory, the government said.

ALSO READ: WHO: 6 out of 7 COVID-19 infections in Africa undetected

France saw the biggest spike in new coronavirus infections since the end of July on the last day of free testing for unvaccinated people, health ministry data showed.

Healthcare systems across Canada are still very fragile from efforts needed to fight COVID-19, even as signs suggest a fourth wave is starting to recede, a top medical official said on Friday.

Chief Public Health Officer Theresa Tam said it was important for health workers to get vaccinated and prevent hospitals from becoming overwhelmed.

“Everybody’s exhausted. And if health care workers have to go into quarantine for example, after exposure, the system simply isn’t going to be sustainable,” she told a briefing. “Our health systems are still very fragile.”

Official data show that as of Oct 8, 81 percent of Canadians aged 12 and over have received two shots against COVID-19.

She also urged Canadians to get their annual shots against the flu, which is worst in the winter months.