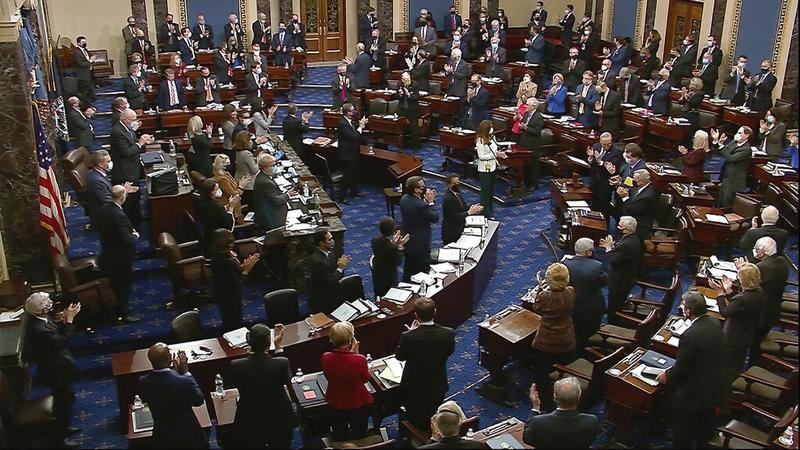 In this file image from video taken on Feb 12, 2021, senators and staff give a standing ovation to US Capitol Police officer Eugene Goodman, shortly before voting to award him the Congressional Gold Medal for his actions during the Jan 6 riot, as the Senate took a break from the second impeachment trial of former US president Donald Trump in the Senate at the US Capitol in Washington. (SENATE TELEVISION VIA AP)

WASHINGTON – The evenly split US Senate on Saturday narrowly passed a US$1.9-trillion COVID-19 relief bill after a marathon overnight session that continued until midday, with lawmakers voting along party lines.

After a session that lasted more than 24 hours, the upper chamber approved the bill by a vote of 50 to 49, with Senator Dan Sullivan, a Republican from Alaska, missing the vote.

The amended bill includes a US$300 weekly federal unemployment benefit through September, instead of the US$400 in the House-approved package. It also added a provision to make the first US$10,200 of unemployment payments tax-free for households with incomes of less than US$150,000

The so-called “vote-a-rama,” a long series of amendments votes, initially began on Friday morning, and was delayed for hours as Democrats struggled to convince Senator Joe Manchin from West Virginia, a moderate, to support their provision on unemployment benefits.

After a lengthy negotiation, Manchin and Senate Democrats finally reached a deal, allowing the “vote-a-rama” to resume shortly before midnight. A motion to adjourn until Saturday morning proposed by Senate Minority Leader Mitch McConnell narrowly failed.

The amended bill includes a US$300 weekly federal unemployment benefit through September, instead of the US$400 in the House-approved package. It also added a provision to make the first US$10,200 of unemployment payments tax-free for households with incomes of less than US$150,000.

The US$1.9-trillion measure, a major legislation for President Joe Biden, also includes a new round of up to US$1,400 of direct payments for Americans, US$350 dollars for state and local governments, support for hard-hit small businesses, as well as funding to directly combat the pandemic.

Senators voted through the night and until midday on a series of amendments, most of which by Republicans, who called the bill partisan and too expensive, and proposed to slash spending. Democrats, who highlighted the urgency to fight the pandemic and support businesses and families, voted down dozens of Republican amendments.

Earlier on Friday, a group of Democratic senators, including Manchin, joined Senate Republicans in voting against Bernie Sanders’ proposal to increase the federal minimum wage to US$15 per hour. Senate parliamentarian ruled last week that an increase to the federal minimum wage violates the budget reconciliation process and cannot be included in the COVID-19 relief bill.

ALSO READ: Democrats retain control of US House of Representatives

Earlier this week, Republican Senator Ron Johnson objected to waiving the reading of the legislation, insisting that the entire 628-page bill be read out loud, a process that took nearly 11 hours.

“If they’re going to add nearly US$2T to the national debt at least we should know what’s in the bill,” Johnson said on Twitter, calling it a Democratic wish list after listening to the reading.

Senate Democratic Leader Chuck Schumer, however, said the American Rescue Plan is one of the most popular bills in decades, calling it a bold COVID-19 relief for people across the country.

“The American Rescue Plan will deliver more help to more people than anything the federal government’s done in decades. This bill is broader, deeper, more comprehensive in helping working people and lifting people out of poverty,” said Schumer.

Senate Republican Leader Mitch McConnell, meanwhile, said in a statement that instead of working together to fight COVID-19, Democrats decided to “exploit this crisis” by jamming through unrelated liberal policies they couldn’t pass honestly.

Most legislation requires 60 votes in the Senate to advance, but Democrats in early February moved to pass a procedural step in both chambers, allowing them to push through the big relief bill with only a simple majority in the Senate, which means they could pass the bill without Republican support.

Republicans criticized the Democrats’ use of the budget reconciliation process, calling it a “partisan” move.

Biden, however, said what Republicans proposed is “either to do nothing or not enough.”

“If I have to choose between getting help right now to Americans who are hurting so badly, and being bogged down in a monthly negotiation or compromising on a bill that’s up to the crisis, it’s an easy choice,” said the US president.

The Senate-approved bill will have to go back to the House for another vote, before it is sent to Biden’s desk. Democrats have been rushing to get the new relief bill approved in Congress, as federal unemployment benefits are set to expire in mid-March.

The Committee for a Responsible Federal Budget, a nonpartisan watchdog group, said in a statement that while experts across the political spectrum have raised concerns about the size of the package, it could ultimately cost twice as much.

“If temporary provisions in the bill were extended or made permanent, we estimate the plan would add over US$4 trillion to the debt over a decade,” said Maya MacGuineas, president of the group.