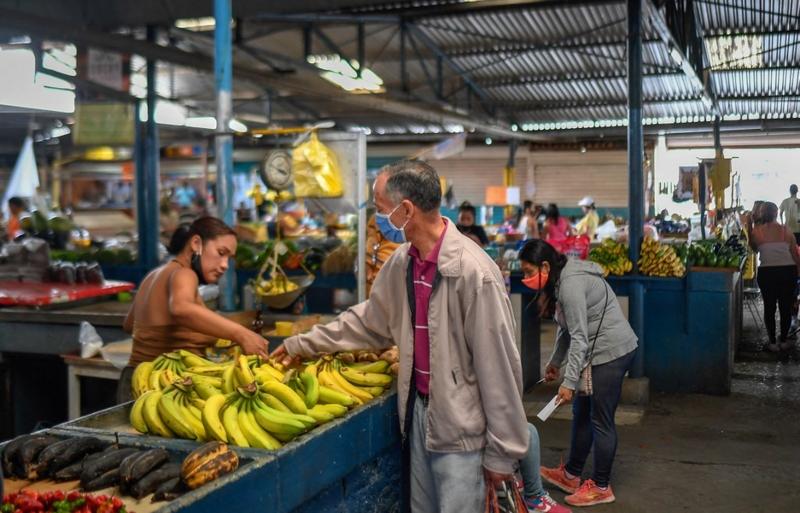 In this Sept 03, 2020 photo, a man buy bananas at the municipal market of Chacao in Caracas, Venezuela, amid the COVID-19 novel coronavirus pandemic. (FEDERICO PARRA / AFP) 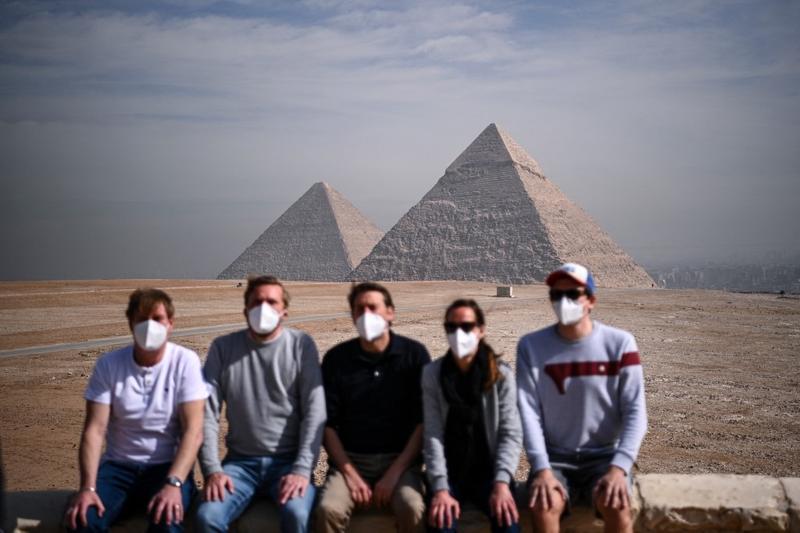 In this Jan 26, 2021photo, people wearing face masks due to the COVID-19 pandemic, pose in front of the pyramids of Khufu (Cheops) (left), Khafre (Chephren), at the Giza pyramids necropolis on the southwestern outskirts of the Egyptian capital Cairo. (ANNE-CHRISTINE POUJOULAT / AFP)

The number of confirmed COVID-19 cases across the African continent surpassed 3,715,923 cases as of Friday morning.

According to the Africa Centers for Disease Control and Prevention (Africa CDC), the number of cases reported in Africa accounted for about 3.5 percent of the global total.

The agency also reported 97,299 COVID-19 deaths, with a case fatality rate of 2.6 percent and accounting for 4 percent of deaths reported globally.

The continent reported 3,256,433 recoveries,  according to the continental disease control and prevention agency.

Five countries accounted for 67 percent of confirmed cases across the African continent.

The number of COVID-19 related deaths in Africa has spiked as the continent grapples with local transmission of highly contagious strains of the virus, the World Health Organization (WHO) said on Thursday.

Matshidiso Moeti, WHO Regional Director for Africa, said the death toll from the pandemic increased by 40 percent in January, fuelled by a second wave of infections and new variants that have overwhelmed the continent’s public health systems.

Statistics from WHO indicate that over 22,300 COVID-19 deaths were reported in Africa in the last 28 days, compared to nearly 16,000 in the previous 28 days.

With these records, the South American country has recorded its 22nd consecutive day with more than 1,000 daily deaths, returning to the worst figures from the first phase of the pandemic in May through July of 2020.

Canada is seeing a continued downward trend in daily COVID-19 cases, with a cumulative total of 816,145 cases of COVID-19 and 21,063 deaths as of Thursday afternoon, according to CTV.

Ontario province reported 945 new cases of COVID-19 on Thursday, although case counts from Toronto had been underreported due to an ongoing data migration. The province reported 18 additional deaths, bringing the provincial death toll to 6,614.

Hospitalizations in Ontario stood at 883, with 299 people listed as being in the province’s intensive care units.

Starting Monday, fitness centers will be allowed to work again, and foreign language schools for children will be reopened, as well as casinos and sports betting shops. Cafes, bars and restaurants will be allowed to sell drinks and food to go, but terraces for guests will stay closed. 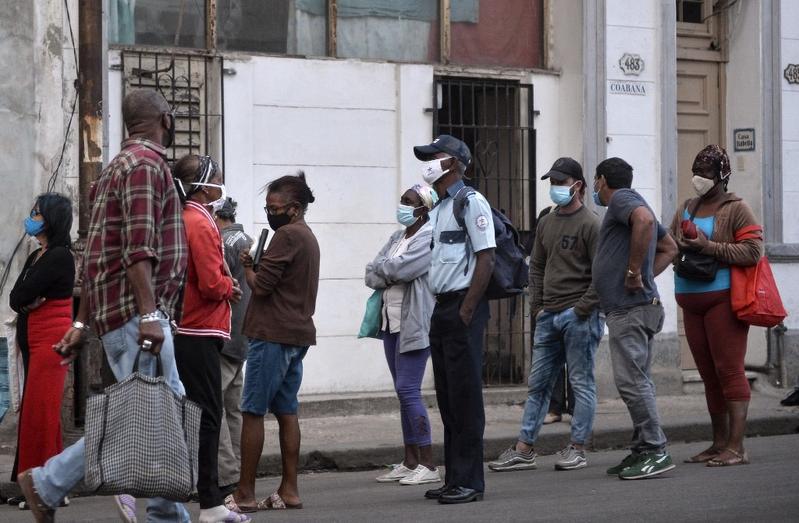 Cuba’s Ministry of Public Health on Thursday reported 850 COVID-19 infections in the last 24 hours, with 528 in Havana, a record number for the Cuban capital, bringing the nation’s total caseload to 35,772.

In its report, the ministry also said that four people died in the same period, for a total of 253 deaths, while so far, 30,695 patients have recovered from the disease.

According to the ministry’s daily report, Ecuador also documented 48 COVID-19 deaths over the same period, bringing the death toll to 10,461, in addition to another 4,713 “probable deaths” from the virus.

Currently, the variant first spotted in Britain represented up to 25 percent of the total positive tests in France, up from 15 percent a week ago, Veran said at a weekly press briefing on the epidemic situation.

Meanwhile, 4-5 percent of new cases were attributable to the variants detected in Brazil and South Africa, he said.

Over the last four days, France has detected 300 cases of the variants – first detected in South Africa and Brazil – in the eastern French region of Moselle where “the situation is worrying,” according to the minister.

As of Thursday, France’s cumulative number of confirmed COVID-19 cases had exceeded 3.4 million, after another 21,063 people tested positive in the past 24 hours, down from 25,387 registered on Wednesday.

Mexico reported a daily rise of 1,474 COVID-19 deaths, bringing the total to 171,234, according to data released by the Health Ministry.

The country is in the process of deploying vaccines with more than 700,000 doses of the Pfizer vaccine administered. More than 85,000 have received a second dose.

Morocco announced on Thursday 471 new COVID-19 cases, taking the tally in the North African country to 477,160.

The number of recoveries from the coronavirus in Morocco rose to 457,325 after 574 more were added, while the death toll increased by four to 8,440, the health ministry said in a statement.

Poland is raising the maximum age limit for people receiving the AstraZeneca COVID-19 vaccine to 65, the minister in charge of the vaccination programme said on Friday.

The country had previously said that the vaccine would be used for people aged 18-60.

Health workers carry the body of a COVID-19 victim on a stretcher at the Portimao Arena sports pavilion converted in a field hospital for Covid-19 patients at Portimao, in the Algarve region, Portugal on Feb 9, 2021. (PATRICIA DE MELO MOREIRA / AFP)

Portugal’s parliament on Thursday approved the renewal of the state of emergency in the country through March 1, allowing the government to keep all lockdown and anti-COVID-19 measures in place until March 1.

“It was a difficult two weeks, but it ended better than it started. It started with numbers of the worst in the world and very high pressure on health structures,” said President Marcelo Rebelo de Sousa.

Authorities said 507 people had died in the last 24 hours, pushing the official death toll to 79,194.

The Swedish government vowed on Thursday to implement its vaccination plans as scheduled after concerns voiced by the country’s state epidemiologist earlier in the week.

“There is nothing today indicating that we would not be able to handle this, provided that we receive the (vaccine) deliveries we have an agreement on,” Lena Hallengren, minister for health and social affairs, told journalists on Thursday.

On Wednesday, state epidemiologist Anders Tegnell told the daily Dagens Nyheter that the plan to have all adult Swedes vaccinated by the end of June may fail due to vaccine delivery problems. And in Thursday’s press conference he voiced a new concern: the more contagious coronavirus mutation first discovered in Britain is spreading in Sweden.

A total of 12,370 COVID-19-related deaths had been recorded in Sweden by Thursday, 44 more than the previous day. Since the pandemic started, 604,577 individuals had been confirmed infected, 4,333 more than on Wednesday.

Britain’s new system for booking a room in its mandatory hotel quarantine scheme was on Thursday taken offline shortly after it launched.

The government said on Tuesday it will require passengers arriving from countries where worrying coronavirus variants are spreading to pay for 10 days of quarantine in hotels, while rule-breakers will face heavy fines or jail terms, under tighter restrictions from next week.

The new travel rules add to restrictions that already ban Britons from travelling abroad for holidays. The government said the stronger measures were needed to prevent new variants of the virus from thwarting Britain’s rapid vaccination programme.

Another 13,494 people in Britain have tested positive for COVID-19, bringing the total number of coronavirus cases in the country to 3,998,655, according to official figures released Thursday. 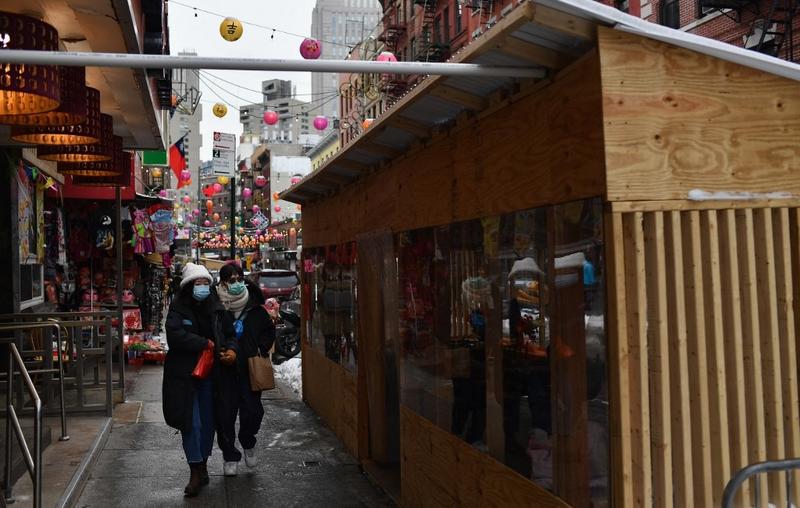 President Joe Biden announced that the US has finished deals for 100 million additional vaccine doses each from Pfizer Inc and Moderna Inc, and that the companies would deliver new and existing orders quicker than projected.

While the orders had been previously announced, the delivery dates for the additional vaccine doses were moved up to the end of July, Biden said in remarks Thursday at the National Institutes of Health. Delivery of a previously ordered batch was also sped up, to the end of May from the end of June.

Total COVID-19 hospitalizations reached 7,342 on Wednesday in New York state, the lowest since Dec. 26 and down from 7,593 on Tuesday, tweeted Governor Andrew Cuomo on Thursday.

READ MORE: One-shot CanSino vaccine stands out for being easier to store